According to the leaked video, the phone and stylus are of different colors pretty different from previous note devices that had same color for both. The video has shown a blue colored phone and a golden stylus pen. The  phone is going to have have a gigantic memory of 1 terabytes along with expansion feature. The looks of the phone is not that unique as it matches with previous Galaxy Note 8 and Galaxy S9. The fingerprint sensors are placed below the cameras which are found to be placed horizontally as we can see in  the image below.

It seems like they’ve put a lot of effort on Stylus as it’s said to act as a bluetooth connected remote control. The pen will remotely trigger the camera on the device. it will also have other features that Samsung will reveal soon. The S-pen on Galaxy Note 9 will charge in it’s slot in the device. Headphones jack are still present which is cool

The phone will have features like iris scanner,huge 4000 mAh battery and huge expandable storage  as discussed earlier. The translation done by SuperSaf Tv on YouTube  on a Russian box shows the specification as in the image below. 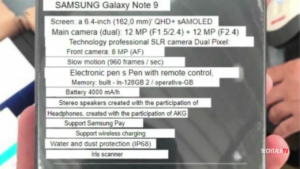 What may be the other features that Samsung is hiding from us? Leave your thoughts in the comment section. Also keep following us for latest news and leaks on the device.

Tags:samsung
How to remove the Knox file from the Samsung A7 tablet? | Knox Remover
Share on FacebookShare on Twitter
ABHIYAN5th August 2018
the authorABHIYAN
Abhiyan Chhetri is a cybersecurity journalist with a passion for covering latest happenings in cyber security and tech world. In addition to being the founder of this website, Abhiyan is also into gaming, reading and investigative journalism.
All posts byABHIYAN
show 1 comment

Secure Your Business: How to Protect Against Cyber Attacks

Getting a Reliable Internet Connection