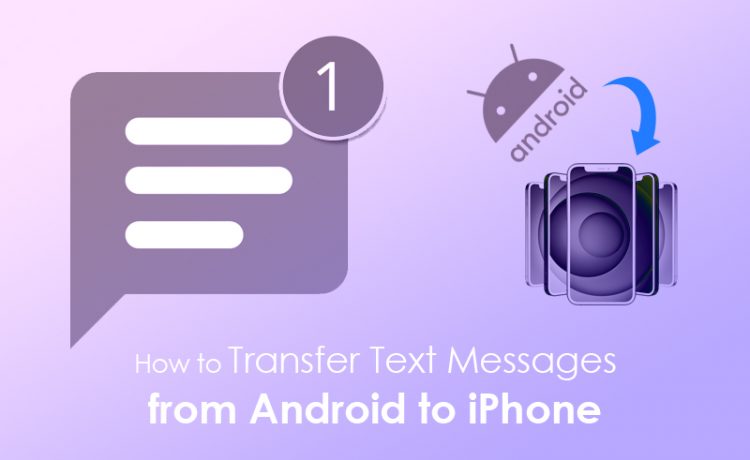 In 2020 the iPhone 12 had the biggest sale ever according to Apple. There were 4 versions of the iPhone 12 available in the market and people loved it. But the most important part of the sale is the number of people who transitioned from Android to iOS. The number was huge and it was significantly bigger than previous iPhone years.

This increase in the sale was excellent for Apple but this also gave birth to a bigger problem. Data transfer from Android to iOS. Transferring data to a new iPhone is easy for the existing iPhone users. Especially, transferring text messages to a new iPhone. But it is the first big hurdle for Android users.

If you want to know how to transfer messages to new iPhone, check out our article. As transferring texts from iPhone to iPhone is easy but several methods are involved. In order to decide the best, you need an exceptional guide. So, be sure to go through our list. Now, let’s check out the details for text transfer from Android to iPhone.

Transfer Messages to New iPhone with Move to iOS

We all know Apple is not keen on releasing applications that are optimized for anything other than iOS. But in order to make it easier for the new iOS users, they had to release an app that will make the Android to iOS transfer easier. Hence, the release of Move to iOS by Apple.

Apple released this app a few years back. As long as you are using Android 4.3 or a later version, you will be able to take advantage of its features. It is a free app, available on the Play Store that makes the message transfer to the new iPhone, easier.

Step1: Install Move to iOS on your Android mobile from the Play Store. You can use the link below.

Step2: Now, open your new iPhone. Initiate the Setup procedure and navigate to the Apps & Data Screen. Tap on the Move Data from Android option.

Step3: Tap to continue and you will be shown a six or a ten-digit code. Write it down.

Step4: Now, on the Android device. Run Move to iOS and continue.

Step5: Go through the Terms and Conditions. Tap on Agree and then tap on Next to reach the Code screen.

Step6: Type the code you were shown on the iPhone. As soon as the code is verified, the Data Transfer screen will appear.

Step7: Select Messages and tap Next.

The data transfer from Android to iPhone will start immediately. A progress bar will be visible and you will know as soon as the transfer is complete.

Users are not so keen on this second method but it is useful if you are in the habit of backing up your texts. So, if you use an SMS backup app, then you will be able to send a copy of those messages via email. By doing this, you will be able to successfully transfer texts to your new iPhone.

Step3: Create a backup of your text messages and doing this will sync the messages to your Gmail.

Step4: Now, access Gmail from the iPhone. You will have easy access to the text messages due to the mail attachments.

Users are not so crazy about this method as they are mostly satisfied with the Move to iOS app. But this method works just as efficiently.

The iPhone’s popularity is growing. New users are joining the iOS infrastructure each year. But the support for outside users is almost non-existent. While text transfer to new iPhones for the existing users is simple. Android users have to deal with the Move to iOS app. And the app is not that great. It’s riddled with bugs and the app hasn’t been updated recently. So, be careful.